So what did you do the previous weekend? Did you ring the opening bell signaling your company joining the ranks on the NASDAQ ticker? Did you turn your long-time girlfriend’s medical school graduation party into a wedding? No? I didn’t think so. Well unlike you, billionaire and Facebook CEO/Founder Mark Zuckerberg was able to check all of those items off of his to-do list this weekend. 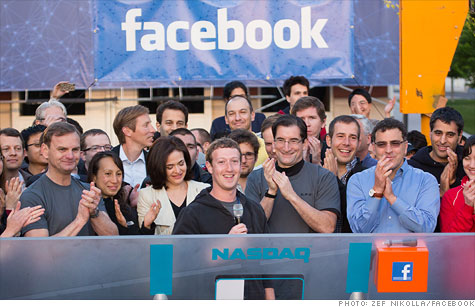 Friday, Facebook appeared on the big stock ticker fir the first time since the company filed for IPO back in February 1. Zuckerberg rang the stock market opening bell remotely from the new Facebook campus with COO, Sheryl Sandberg, in tow. Facebook Inc. (FB) started the day with $38 even with a peak rise to $45 and a drop to $38.37 to finish off the day.

Next on Mark’s agenda was to surprise the guests at his long-time girlfriend’s graduation party with a wedding. Mark Zuckerberg and Priscilla Chan first met in 2003. The two were in a bathroom line for a frat party hosted the by Jewish fraternity Alpha Epsilon Pi when a conversation was struck up. Here’s an excerpt from a New Yorker article with details on the couple’s first encounter:

“He was this nerdy guy who was just a little bit out there,” Chan told me. “I remember he had these beer glasses that said ‘pound include beer dot H.’ It’s a tag for C++. It’s like college humor but with a nerdy, computer-science appeal.

Since then Zuck and Chan’s relationship has lasted the test of time and until they were finally married on May 19, capping off what will most likely be the biggest weekend of Mark Zuckerberg’s life.

So the next time you head out for the weekend, just remember…you can’t outdo the Zuck.