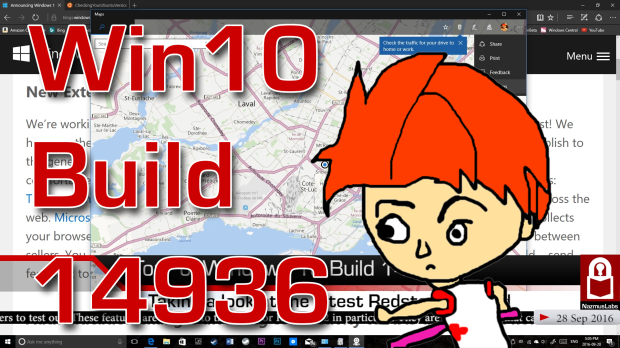 Today, we’re talking a look at the latest build of Windows 10 from the redstone 2 development branch, released to fast ring users of the Windows Insider Program. This insider preview of the OS is currently at build 14936.

Released on September 28th, 2016, this build brings no visible new features to the operating system but does include plenty of under-the-hood changes. As part of the preview, Microsoft is also updating their preinstalled apps with new features for insiders to test out. These features are not tied to this build or Redstone 2 in particular. They are app updates that can, and likely will, roll out to users of the stable branch (Redstone 1). Microsoft is using the Insider Program and releasing the apps exclusively to Redstone 2 users for now to test out the new feature before rolling it out broadly.

Speaking of app updates, Microsoft released updates to the Windows Feedback Hub and the Windows Maps app, bringing with it a dark theme. I was unable to demo this on my last build tour video due to a problem in updating the apps from the store. So, I take this opportunity to demo the builds to you here!

Microsoft is also previewing browser extensions for its Edge browser, bringing it to the insiders to preview first before signing them off in the production builds. These extensions are usually third party extensions, though some are first party.

Examples of such extensions tested for the redstone 2 release include “Turn of the Lights”, “Microsoft Personal Shopping Assistant”, and “Tampermonkey”.