For those of you who don’t know, The posts work in the same way as embeds from Twitter and YouTube. Once your account is enabled, you will have the option to “Embed post.” That will produce a code you can copy and paste into a blog entry or HTML file. 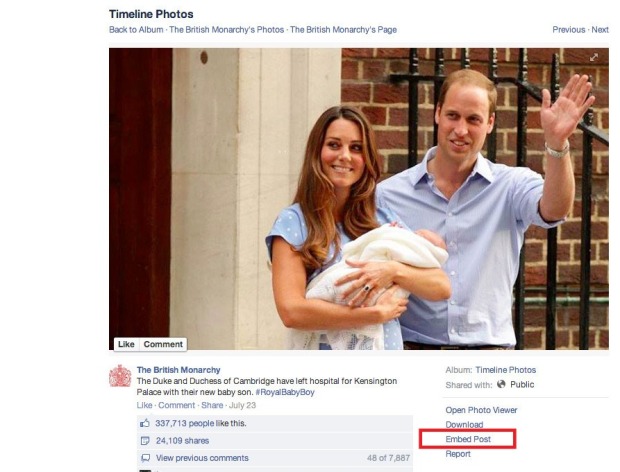 But the bad news is, it’s only available for a small amount of companies or pages (i.e The British Monarchy, Mashable, Fox News…etc) It allows companies and pages to interact with users even if they are memebers of the site or not and according to Consumer Reports, 72% of Facebook Users have their post settings on Private.

Remember when Facebook introduced #hashtags? Facebook introduced Hashtags in June so users and journalists could track conversations on Facebook about various issues. The new embeds can also include hashtags, which readers can click on to see those discussions. So it is as easy as clicking the hashtag.

Embedding a Facebook post is easy. The drop-down arrow on news feed and Timeline posts will include an “Embed” option that lets you copy the HTML into any site or blog.

So what do you all think? Is this a beneficial feature? A flop? Leave a comment below.