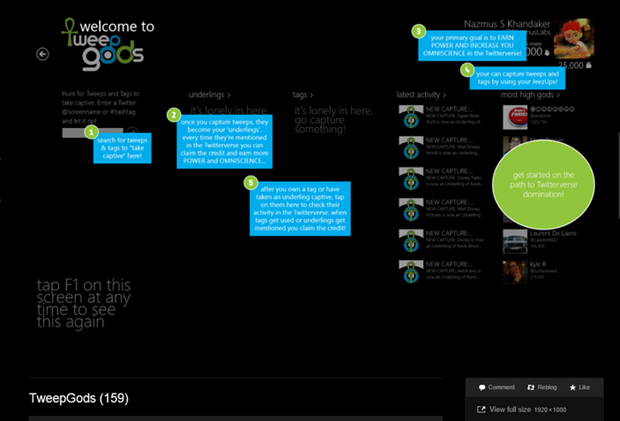 We have seen many entertainment apps on Windows 8 so far. But I think today’s app has creatively taken entertainment to a new level. Enter TweepGods, the featured app for today. With this app, you can virtually “purchase” and “own” twitter accounts and hashtags. You start off with 25,000 free points, and you can use it to “capture” (i.e. own) a twitter user or a hashtag. If the twitter user is popular, it costs 2,500 points; otherwise, it costs 1,500 points. Popular users are worth more in value, and as you capture more users, your “power” point increases to be the sum of the values of all twitter users and hashtags. If you run out of the 25,000 free points, you can purchase more virtual points. I used the free points to capture some popular twitter users because I was lucky enough to get in early. If you are reading this and want to join in on the fun, install the app now and “own” your favorite twitter accounts before someone else beats you to it.

Become a Master of the Twitterverse by taking captive Tweeps and Tags in the wildly addictive Social phenomenon tweepgods! Where your Tweeps become a “captive audience”!
Capture users and make them your “Underlings”, take ownership of Twitter Hashtags, and then increase your godly Omniscience by claiming their use and activity on Twitter!
Start your path to full on Twitterverse domination now, you won’t be sorry…gods never are!