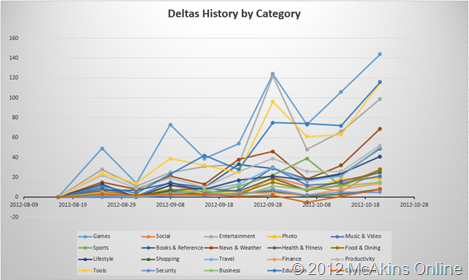 Welcome everyone to another edition of News from Windows Store. First my sincere apology for the belated publication. Sometimes life just catch up with you and you can’t escape its clutch. With this past weekend activities I hope to make time available to the General Availability activities of Windows 8 this week. So fully prepared thus.

Well, as you can see, the Store exploded again this week. We broke all records of published Apps per Week with this weeks total of 933 Apps! I am not surprised of this figure at all because it was clear to me during the week that I was having troubles keeping up with the number Apps dropping into the Store combined with my Day Job. What I have noticed this time around is the explosion in the number of Apps from or dedicated to India. I strongly suspect we are seeing the result of the publication of the App Marathon in Bangalore India for which MS received a Guinness Book of Records Award.

So where do I start, where do I stop? You will have to excuse me this week as I can’t possibly mention all the good apps that dropped this week, else you’ll be here still by tomorrow going through the list. So I will mention the most exceptional ones, and present you with the list of other remarkable ones I feel you should search for in the Store.

The most exceptional ones I have already blogged and should be familiar for those of you following this blog. First were JPL and NBC that brought NASA Be A Martian and Breaking News Apps to the Store, followed by Al Jazeera bringing their official app to the Store. Then there was Dilbert dedicated Comic app. But the most waves were made by BookReader and Cumulo apps, the first being the first most stable eBook reader in the store, and the latter being a Cloud Drive aggregator for different cloud platforms like SkyDrive, Dropbox and Google Drive. T-Mobile also re-released their Data Plan app this week, thereby correcting the first lack-luster app they released with Developer Preview that no one could use. Other quality apps of note were the US Army Weapon Systems Handbook App andG-Maps, a beautifully designed Google Maps app in the Store. Someone decided not to wait for Reddit to release an official app but went ahead and released a rather nicely designed app for Reddit. Finally we have the British Airways app dropping in the Store this week too.

The credit for the numbers of Apps in the Store this week has to go to the Dutch, a Travel Dialog company, all About a Country Apps and a number of People Apps explaining the lives of the likes of Isaac Newton, Einstein, Indra Gandhi etc. The Dutch for filling the Store with a number of their national Newspapers apps. Note that all these apps require that you have an account with the Newspaper before you can use them. The Dialog Apps trying to assist you in conversing with the local populace while travelling and the About a Country showing Country details. 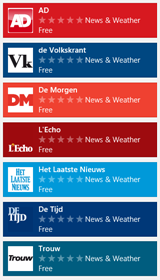 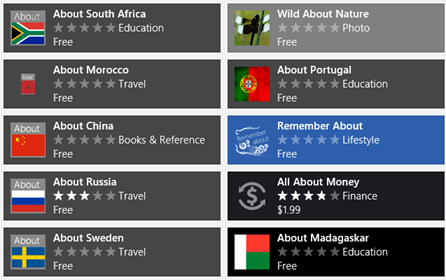 This past week also saw a lot of Updates in the Store. You can tell all App Developers are really prepping their apps for the GA. Notable this week were the Built-In Apps that saw a re-run of updates like we had the week before. I think this time around mostly to correct bugs in the former updates. For example, a lot of us using the Built-in Mail Client couldn’t select Contacts after the original update last week, this week’s update fixed this. Other indy App Updates are TweeTRO that released a feature updates this week with which you can now type a Twitter contact name and it will show at the bottom of the tweet box for selection. Also auto-load of URLs has been switched off because of its security risk, there is now options to turn it ON if you want.

The best update this week however goes to FlipToast that really surprised me with the latest update. They’ve released a matured app into the Store. I think it’s a complete re-write of FlipToast as you don’t see anything resembling the former. The current version is just simply gorgeous, and the app is now usable for Facebook, Twitter and Linked-In. And they even threw an extra addition to it, you now have Instagram integration too in FlipToast. Words really didn’t do FlipToast justice, you need to use the App. This is what Metro was supposed to be! Beautiful, fluid and responsive and with semantic zoom.

Finally on updates, I think the sad story this week is the Vendors of MetroTwit begging Microsoft to launch an expedited accreditation procedure for Bug-Fixes. After MetroTwit update of a week ago, a number of serious bugs were identified affecting overall experience of the app. These were promptly fixed by Pixel Tuckers Pty Ltdand the app re-submitted. They’ve been waiting in vain for publication. Believe me, yours truly have also been waiting in vain for this update to drop because MetroTwit is really a pain to use at the moment, and it hasn’t dropped as of writing of this post. Microsoft, it should not be necessary that a Dev should post something like this:

So, enough about Apps, lets talk Stats. I released an interim picture post earlier this week to inform that we crossed the 4K milestone in the Store, that was around Tuesday/Wednesday. As you can see, we’ve since moved up a couple of hundreds more, with the tally now at 4284. So if Microsoft could publish 900+ apps this past week, and they are able to repeat the feat this coming week, we’ll cross the 5K milestone, which will really be a feat and a crown for Microsoft and Windows 8.

Again, wearing the crown this week is the Games category with an almost linear increase as last week, seeing some serious game releases this week like Words By Post, Chess by Post. My personal favorite is Checkers Pro, can’t keep my hands off that game the whole week. Vying for Second and Third position is the Education and Tools respectively. Can you imagine? Education is moving more than Entertainment category which used to be the de-facto second. I am personally glad for the Tools category, a technician needs his Tools like they say. The Tools category has the highest gradient, week-on-week value, this week.

Remarkable however is the surge of Paid Apps that we saw this week. Almost 200 apps of the 933 total were paid apps (see related last week report below to compare). What can I say, its GA almost, and Devs are now ready to cash in. I hope most of us buy really good apps in the Store to encourage the Devs for their efforts as their success is Windows Platform success too. My apologies, I couldn’t complete the Stats with Localizations and Accessibility records this week, I am already so late with this update. 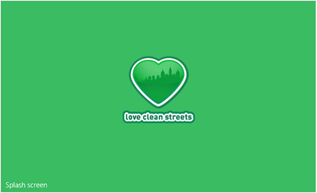 I will leave you finally with the following list of Apps that you should check-out as they are good apps too, but haven’t had the time to blog them, or mention them in this update. But my special mention goes to the Green app “Love Green Streets” shown above. With this app you can report to your local government reps where things aren’t right with the environment for maintenance purposes. Click on the picture to go to the app download page. So I leave you with the list:

I hope you find some of them as useful as I do.

The madness is starting this week, and I’ll be all over it like a bug on a pot of honey. I will be covering the Store News as they occur, I know you’ll be at other Tech sites for the GA news, but I’ve got the Store covered for you. Hope you’ll be dropping by regularly as I update this site with News. I will advice to follow my Twitter account for micro-breaking news. Its going to be a busy week and I have reserved the time to for you, hope not to disappoint. Again my apologies for being so late. Have a smashing week ahead.

[Notice anything out of place? Wrong URL? Hit me on Twitter (@McAkins) to let me know. Thanks already.]