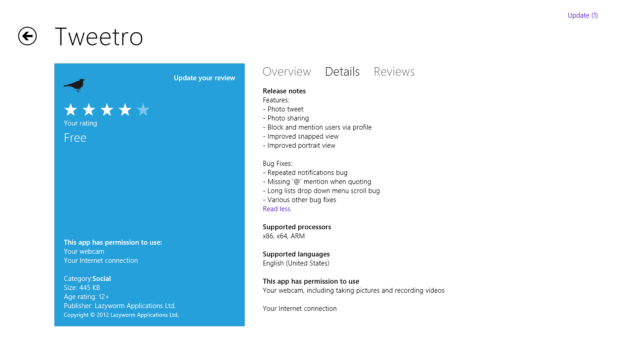 The much appraised TweeTRO Twitter client has just been updated in the Windows 8 Store bringing the much anticipated updates and stability improvements! The feature updates we’ve been asking for includes Auto-Refresh of personal columns apart from the Timeline column auto-refresh that was brought by the last update to the app. The picture above shows detailed updates release in this version v1.20 of the App.

Another change is improvement to the GUI. The large “Remove Column” button is now gone, making way for simple text. Also the fonts are reduced, especially the Timeline header font. But it seems the custom columns header fonts are still too large, and there is still nothing in the settings to adjust this fonts. Also new is the reflow of avatar images around the header Avatar image showing sequence of arrival of messages.

A much loves feature of TweeTRO is its auto-load of URL in a message. Although this is a popular feature, it is a security hole as I have informed the vendors. If a spammer send you a bombed-url to a Trojan and you auto-load it, then you could potentially be infected. Also, as good as this feature is, it is a resource was because you don’t always go to all URLs in you messages. If you are running on 3G data, this could eat through your data quota quickly. I would rather they made this optional so you can choose to opt in or out of the feature. For me security is paramount.

Well, this update brings a lot of goodies as they indicated. I hope you too can appreciate the efforts of the vendors. Keep up the good works Lazyworm!

[Update:] Tracking a bug in the URL Auto-Load feature, if the URL points you to a Youtube video, it begins to play automatically without the webpage receiving focus, and when you return to main page with the Return button, it doesn’t stop playing the video. It keeps playing in the background. Will inform Lazyworms of this error.

[Update:]
It seems I was wrong on that Auto-Refresh of custom columns, it is still not auto-refreshing. Hopefully that will come in the future. This is a much desired feature. In compensation, I forgot to mention an important feature addition, that is, the ability to attach a picture to your Tweets from the library or take a picture direct from the Camera! Little steps forward Lazyworm, but in the good direction. Now unto the rest.