The game demonstrates quality to be expected of Metro Games in Windows 8. The game is playable for 3yrs and above, and it should be noted that the game is available to devices on the x86 and x64 platforms only: 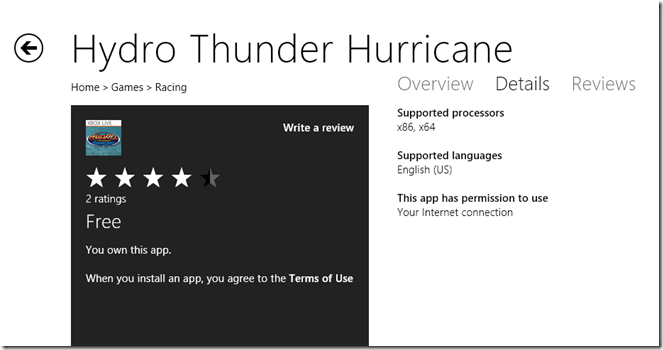 This means the game is not available for the WoA platform. I am suspecting this to be the trend of things to come in which high quality Games will only run on the x86/x64 platforms while casual games will only run on the WoA and of course on the x86 platform. So if I were you, I will buy an x86 device later this year as you can be sure you’ll never miss anything. If Intel indeed nailed battery hours on the Clover Trail processors, they are going to be a selling point for x86 tablets later this year. Anyway I digress.

Try the game out, and let me know what you think. Happy speed boating!

ATTENTION: This game is not yet visible in the store. You will need to open the Store, open the Charm and do a search for Hydro Thunder…