There are those who have the misfortune of having their mobile device tarnished due to carelessness. I have now officially joined that club. How did this happen you ask? Well, there is a story to this. But be warned though. The story does involve an iPhone being damaged. Readers discretion is advised.

I currently intern at a pretty large hospital in Albany, New York as a web developer. I live in Troy which is about 10 miles away. Since I don’t have a car, I take 2 buses to get to my destination.

So the day started out normally. I get up with just enough time to freshen up, get dressed, and maybe grab something quick to eat before I’m out the door. A 20-minute walk and a bus later, I’m in Albany waiting to catch the next bus. Usually the connecting bus comes almost right after I get off the first bus. Since that wasn’t the case this time, I figured I’d head over to local branch of a bank I belong to and deposit some money.

Once I finished at the bank, I head outside of the building across the street pictured on the right. Lo and behold I see the bus I need to catch sitting at a red light. Now if you know traffic lights, you also know they can be unpredictable. So I began to run. You should note that I had my iPhone in my jacket pocket connected to my headphones without a case (yes I said with out a case.)

I manage to cross the street without issue but once I reached the other side, my phone bounced freely out of my pocket, ripped free of the headphone jack, landed on the bottom right corner of the device, and then skidded a few feet face down.

(Pictured above: the area where I dropped and cracked my iPhone)

When I saw my phone go flying, a little part of me wanted to jump into traffic, but I didn’t have time. I had to catch the bus to avoid being late for work. Once I reached my seat on the bus, I examined the damage taken to my iPhone. Other than the crack pictured at the top of the post, the phone suffered slight scuffs on the silver siding and around the edges. as for the screen, I had protectors on both the front and back of the device so that they were perfectly intact.

Now where does the “Here’s How to Protect Your Device” part come in? Well right here in fact. I should’ve had a case on my iPhone. Normally I do. But sometimes I hate to obscure the beauty of such a elegant device. But now that elegant device has been marred by the carelessness of an intern in a rush without a case on his device. Please take my advice and protect your mobile device with a case and screen protectors. You don’t want to chance taking damage to an expensive device do you?

I’m sure you could guess what I did as soon as I got home after work. 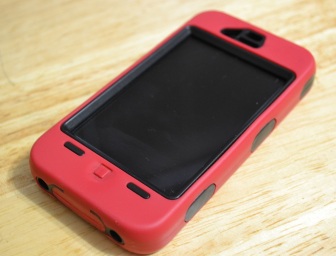