It’s been 6 days since the news about Joseph Kony first broke via the 30 minute documentary ‘Kony 2012.’ The video was released by Invisible Children and already the straight-to-YouTube film has broken the 100 million viewer mark and has claimed the title of being the most viral video in history.

According to a Mashable post featuring data from research done by Visible Measures, Kony 2012 blew all of the competition and beat out Susan Boyle by three days. Of course the documentary didn’t come without its share of criticism from the masses. Hey, there’s even a Kony 2012-is-a-Scam Website.

Again, it’s no secret that Invisible Children had somewhat of a shaky past, but they believe in this cause along with millions of other people. Planning on joining the bandwagon? I do  recommend you do your research on the matter before getting financially involved with the movement. 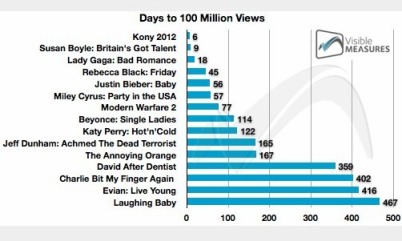 Haven’t heard the news about the Kony hullabaloo? You might want to watch the documentary and see what the excitement is all about. Hit the link here to head over to YouTube for the video.