So NVIDIA brought some really interesting goods to the floor at CES on Monday. While we weren’t there, we were watching via live streaming courtesy of CNET. But enough with the article intro. Let’s get into this.

NVIDIA had several goodies to show off at their CES press event on Monday. To start off, NVIDIA announced that the newly released ASUS Transformer Prime tablet (with NVIDIA’s Tegra 3 processor) now has an Ice Cream Sandwich update available right now for all you early adopters out there. The Transformer Prime also will start shipping with ICS on board from the factory starting next week.

Speaking of the Tegra 3 processor…this new addition to NVIDIA’s Tegra processor family for Android tablet is a quad core processor with a 5th ninja core “which draws very little power and is able to run background and ordinary tasks with little impact on battery life.” Also the processor features PRISM technology that intelligently changes the backlight on Tegra 3 devices and cuts battery consumption by 40% by “modulating the backlight per pixel, frame and scene.” The Tegra 3 processor also offloads most of the touch panel’s processing power to the ninja cores which boosts the touch processing speed by a factor of 6 (that’s x6) which in turn lowers costs and power consumption.

As if we weren’t finished talking about the Tegra 3, the processor is also being used in several new model cars to handle the built in displays and features in the Tesla 3 sedan, the Audi A7 and the new Lamborghini Aventador.

In other NVIDIA news, the graphics company announced on behalf of ASUS a 7 inch version of the Transformer Prime running ICS with Tegra 3 on board for the pinch-myself-because-I’m-dreaming price of $249. 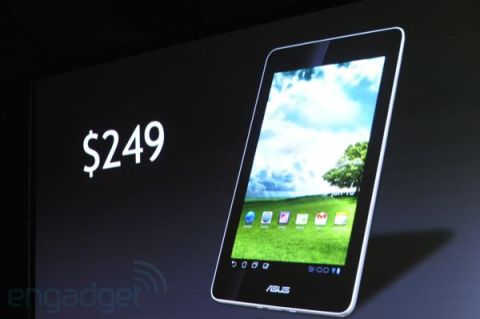 Last but not least is the Slashtop app available for Tegra 3 devices. This app in combination with a GeForce GTX-based gaming PC allows for remote gameplay. This means you’ll be able to play PC gaming remotely on your Tegra 3 tablet. Hope you like playing Skyrim and Modern Warfare 3 on the go!

In case you want to actually see what NVIDIA unvelied (DUH! Who wouldn’t?) We have the video below for you.